Here I explain how music in surround sound easily could be MUCH MORE WIDESPREAD!
This video is with 5.1 surround sound (will be downmixed on a stereo setup)

Pdf from WHO about ‘Burden of disease from environmental noise’:

and all species working on making the world a better place!

Printz Music is for musicians who want to release their music in better quality than usual and in an easy way!

Releasing an album is like having grown up kids leaving from home – They should have the best opportunities to meet with as many different recipients as possible! Especially those who appreciate the fact that they come in the best quality!

When an album is made for a CD or digital release then Printz Music can easily make a really good surround sound mix of the album! You only need to export (bounce) track by track from the same place with the respective plug-ins. You’ll get back multitrack flac files and/or an ISO file to a Blu-ray or AVCHD – DVD with still pictures in 48/96kHz 16/24bit that can be put up for sale on your website / record label or otherwise via surroundmusic.one / Bandcamp.

It’s very likely that surround music soon will get a break through because of wireless speakers! 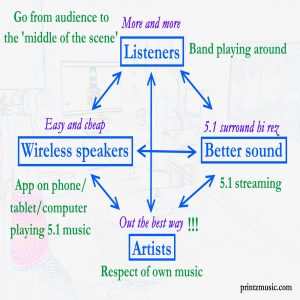 The  main cause of Printz Music is to making music in surround sound more common! Help the circle above spinning faster!

Why should music also come out in surround sound?:

ALL bands that respects their own music and think it has a great sound, should insist that their music (in addition to streaming services) also came out in multiple ways! For the fans longing for listen to music in the best quality it can be in 96 kHz 24-bit and preferably in both stereo and 5.1 surround sound. Hi-res surround sound music sounds twice as good than the CD sound!

Almost every listener of music are used to listen to stereo (or mono from small devices). Like being to a concert a distant from the stage. They does not realize that they can listen to music as being on the stage with the musicians playing all around. That is like listen to surround mixes! Getting a system for playing surround music is now a lot easier after wireless speakers for surround systems has arrived!

As what came first? The chicken or the egg … Here it has enormous significance that most people don’t hear music in 5.1 because their favorite band often does not make music in that quality.

Why do mankind nowaday listen to music in worse quality than the CD format in 1980???!!!

CD format from 1980 that is 40 years old. Compressed music from streaming services gives even lower quality. The advantage is that it’s easy to stream and you can have a lot of his music on your mobile and is therefore so common.

If you have some music you enjoy listening to and can hear it at least on standard speakers the quality of the CD format is outdated and streamed music even worse. Therefore, vinyl had a renaissance and has itself a better sound than CD audio sampled only at 44.1 kHz 16 bit, but the problem it’s crunchy and there’s scratches that are not supposed to be with the music. This is annoying listen to especially at quiet passages of the music.

By far the best quality of music is nowadays sampled at 96 kHz 24 bit and especially when it is made in quadrophonic (4.0) or 5.1 surround sound. It can now be heard multichannel flac files from a computer or on Blu-ray and some DVD’s (better than Dolby Digital only at 44 kHz-16bit)

Streaming Services could easily keep up with and deliver sound much better quality if the demand for it was present. It’s a shame that not even Youtube will allow 5.1 audio, even when there already is a choice of different qualities. This will probably only change when demand is high enough from the users or very popular bands.

From here encouraged to demand better quality, including 5.1 sound and bands to give their fans the possibility to hear the music in the best quality!

Why listen to music in 5.1 surround sound?

Most people are used to hearing music from a mobile computer or a smaller unit (preferably without wires) and got the sound in stereo or mono. This corresponds to be at a concert and hear the music from a certain distance.

But how many don’t want to get up in the middle of the stage and the orchestra playing around you?! – That’s the way a reasonable 5.1 surround sound mix will sound! But how many have thought about this? Just a few, and that’s probably the most important reason that people are not really interested in listening to music in 5.1 surround sound. Would you like to sit and enjoy a good album in a music system, it requires just a surround amplifier, a pair of speakers and wires to. This also goes against of the hearing 5.1 audio. Some have, however, a smaller or larger home theater system for watching movies with front and rear speakers that easily could play music in 5.1 or 4.0. Otherwise, there has been relatively cheap headphones on the market that has 4-5 units for each ear there can can give a sense of surround sound (Also works well in combination with gaming)

I could see for myself a new export adventure with wireless speakers and a transmitter that can wirelessly send music to 4 devices (Quadrofoni) or 6 devices via wifi, for here bluetooth enough not supply data fast enough. Perhaps new apps to what’s available in the market now could make it or just upgrades to existing software.

The development of annual surround sound releases according quadraphonicquad.com 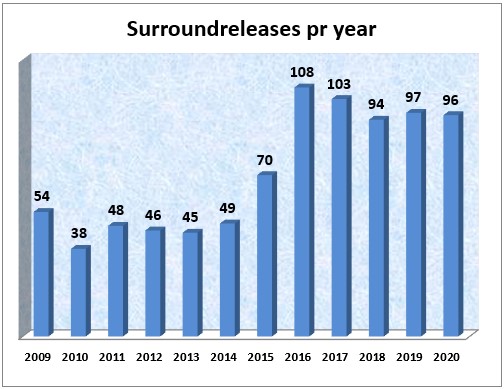 How great an experince is it to listen to music? 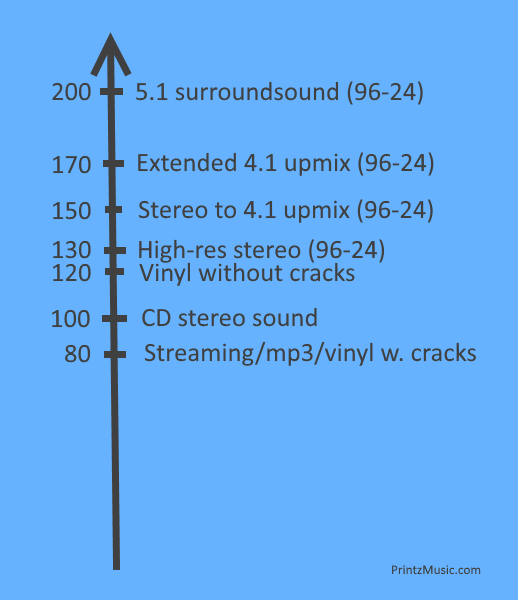 Why be a spectator when you can get up in the middle of the stage???!!!

How to get your album mixed in surroundsound

Hi-res music as surround sound embraces you and enriches your life, as a counterweight to noise taking away millions of years of our lifespan globally!

See the WHO report about noise problems here.

Planet Earth Values The Most- 80% mark